All My Godless Ways

Though God Himself, Christ chose to become human;
Though human, I’ve become a child of God.

About This Song:
If you’ve been following this blog for a while or you’ve gone back and looked at some of the previous posts, you may have noticed my fondness for combining Christmas and Easter ideas in one song. Today’s song is another one.

Some animals grow into adulthood rapidly. We have a miniature dachshund puppy who’s grown now. In many ways she still looks like a puppy. Yet I can look back to what a difference a month or two made when she was young in seeing the transformation into a  fully grown dog.

Although we can see the changes in people, too, they take years to reach physical adulthood–and even then some of them aren’t fully “grown up.”

Growing into maturity as a Child of God is similar. Except it takes even longer than maturing physically. We won’t mature spiritually–not fully–until the end of our earthly lives.

Sometimes I imagine God getting frustrated with me for the slowness of my growth, but then I think about His fondness for children. Jesus said, “Let the little children come unto me.”

God doesn’t expect instant changes or huge spurts of spiritual growth, but He doesn’t want me to get stagnant, either. So I prefer to think of Him as cheering me on each time He sees any sign of growth. Even the tiniest one.

A Christian can grow frustrated if he looks at what he wants to become and and frets over how far he is from the goal. Better to look backwards at where he started and note the progress he’s made.

If you’re a Christian, are you growing? If you’re not a Christian, wouldn’t you like to have God as your heavenly father, encouraging you to live the most meaningful life possible? 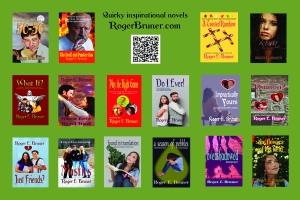 Seventy-five-year-old Roger E. Bruner is the author and publisher of twenty Christian novels and the writer of more than two hundred Christian songs and choruses, a handful of musical dramas, and a number of shorter works. He sings, plays guitar and bass, and records his original songs in his home studio. He is active in his church's nursing home ministry He also plays bass guitar on the church raise team. Married for seventeen years to Kathleen, he has one grown daughter. Kathleen has two. Roger enjoys reading, moderate exercise, photography and book cover design (he's done all of his own except for Rosa No-Name), playing Snood, making walking sticks, and complaining about the state of the nation while continuing to pray for it.
View all posts by Roger E. Bruner →
This entry was posted in Christmas, Cross, Death, Easter, Growth, Human, Manger, Rebirth, Wood and tagged Christmas, Cross, Death, Easter, Free Christian Lead Sheets, Free Christian Lyrics, Growing as a Christian, Manger, Miniature Dachshund, On Aging Gracelessly, Rebirth, The Manger and the Cross. Bookmark the permalink.