Is There a Man Who’s Religious?

A home audio recording of this song may be heard here.

Is there a man who’s religious
And does what he thinks he should?
I tell you unless his tongue’s under control,
His religion’s no good.

The tongue’s such a small thing,
Like a bit in the mouth of a horse
Or like the rudder in a ship’s stern
To keep it on course.

But the tongue’s more like the small spark
That sets the whole forest aflame.
Unlike the wild birds and animals,
The tongue’s never been tamed.

Is there a man who’s religious
And does what he thinks he should?
I tell you unless his tongue’s under control,
His religion’s no good.

In my humble opinion, the misuse of the tongue creates as many problems as anything else I can think of. The apostle James must have thought so, too. He wrote the Scripture I based “Is There a Man Who’s Religious?” on. Check James 1:26, 3:3-4, and 3:5b…

26 Those who consider themselves religious and yet do not keep a tight rein on their tongues deceive themselves, and their religion is worthless.

3 When we put bits into the mouths of horses to make them obey us, we can turn the whole animal. 4 Or take ships as an example. Although they are so large and are driven by strong winds, they are steered by a very small rudder wherever the pilot wants to go.

5 Likewise, the tongue is a small part of the body, but it makes great boasts. Consider what a great forest is set on fire by a small spark.
(NIV)

What more can I say? The Bible–God’s instruction book for how we humans ought to live–hits the nail on the head this time as well.

The next time you’re tempted to speak in anger or to gossip or say something unkind about someone–I still have those problems, too–think about this Scripture and ask God to help you do a better job of controlling your tongue.

If you have a comment, I’d love to hear from you. Better yet, why not subscribe to this blog so you won’t miss any posts. 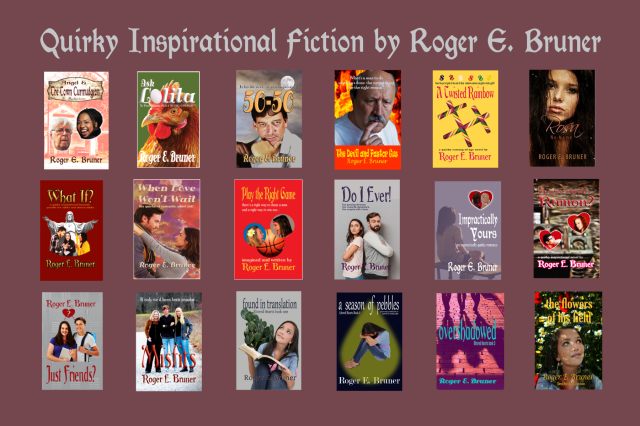 Seventy-five-year-old Roger E. Bruner is the author and publisher of twenty Christian novels and the writer of more than two hundred Christian songs and choruses, a handful of musical dramas, and a number of shorter works. He sings, plays guitar and bass, and records his original songs in his home studio. He is active in his church's nursing home ministry He also plays bass guitar on the church raise team. Married for seventeen years to Kathleen, he has one grown daughter. Kathleen has two. Roger enjoys reading, moderate exercise, photography and book cover design (he's done all of his own except for Rosa No-Name), playing Snood, making walking sticks, and complaining about the state of the nation while continuing to pray for it.
View all posts by Roger E. Bruner →
This entry was posted in James, Religion, Rudder, Tongue, Uncategorized and tagged Control of the tongue, Free Christian Lead Sheets, Free Christian Lyrics, Horse's bit, On Aging Gracelessly, Rosa No-Name, Ship's rudder, The Devil and Pastor Gus, Uncontrollable Tongue. Bookmark the permalink.