When We Return to Him in Faith

Through Moses, God delivered the children of Israel
From their Egyptian captivity,
And He safely guided them through the wilderness
Towards the Promised Land.

But, stubborn and rebellious, they sometimes wandered needlessly;
Yet God never sleeps, and He stayed close by,
Ready to forgive when they returned to Him in faith.

Through Jesus, God delivers all those who believe
From their captivity by sin and death,
And He safely guides them through this earthly life
Towards their heavenly home.

But, stubborn and rebellious, they sometimes wander needlessly;
Yet God never sleeps, and He stays close by,
Ready to forgive when they return to Him in faith.

But, stubborn and rebellious, we sometimes wander needlessly;
Yet God never sleeps, and He stays close by,
Ready to forgive when we return to Him in faith.

I dedicated this song to my pastor at the time, Rand Forder. If anyone happens to know Rand’s whereabouts now, please let me know. He’s a great guy and a real inspiration, even though I doubt that his Snoopy sermon illustrations affected this song in any way.

If the Children of Israel had obeyed God instead of turning their faces from him so often, they could’ve made their trip from Egypt to the Promised Land in a LOT less time than forty years. Less than one year, I’ve heard, but I don’t recall the specific estimate.

Have you ever tried to go somewhere with a strong-willed child under tow? Took a lot longer than it should have, didn’t it?

The Children of Israel tried God’s patience more than once, yet He was faithful to fulfill His promise of deliverance from slavery.

I don’t know about you, but I try God’s patience far too often. He’s trying to lead me on a path I can’t see. If I just trust Him, it’s a sure way–the only sure way–to go. But I like to be in control–or to pretend I am. I like things the way I like them. I want to know God’s path ahead of time so I can decide whether His plan is really that much better–or that much more to my liking, anyhow–than mine.

But God stays close by, just as He always has, ready to forgive and to put me on the right path again as soon as I admit my sin and seek His forgiveness. He may have to put me on an alternate route from the one He’d originally planned, but He sees that I’m still going to get there. “There” may not be where I wanted to go, but where He wants me to be. If I’m to trust Him fully, I also need to trust that He knows my destination a lot better than I do.

What about you? Are you pursuing your own path and wandering in the wilderness? Or are you willing to let God do the directing?

The Devil and Pastor Gus has a new cover. 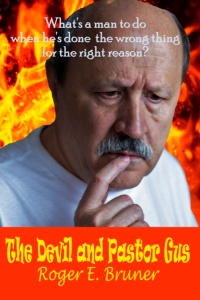 Seventy-four-year-old Roger E. Bruner is the author and publisher of eighteen Christian novels and the writer of more than two hundred Christian songs and choruses, a handful of musical dramas, and a number of shorter works. He sings, plays guitar and bass, and records his original songs in his home studio. He will be active in his church's nursing home ministry again when circumstances permit and in the church choir when it starts up again. In the meantime he'll keep playing bass on the praise team. Married for seventeen years to Kathleen, he has one grown daughter. Kathleen has two. Roger enjoys reading, moderate exercise, photography and book cover design (he's done all of his own except for Rosa No-Name), playing Snood, making walking sticks, and complaining about the state of the nation while continuing to pray for it.
View all posts by Roger E. Bruner →
This entry was posted in Children of Israel, Deliverance, Forgiveness, God's Leading, Moses, Obedience, Promised Land, Repentance, The Devil and Pastor Gus and tagged As I Come Singing, Children of Israel, Deliverance, Disobedience, Free Christian Lead Sheets, Free Christian Lyrics, God's Forgiveness, Moses, On Aging Gracelessly, Rand Forder, Roger E. Bruner. Bookmark the permalink.