If you’ve come to walk just one mile
And to tell me what you’re taught to say,
Go on home; I’m not gonna listen.
I don’t think you’ve a thing real to say to me.

But if you will walk all the way
And tell me how you really feel,
Have a seat; I’m ready to listen.
I think you might have something real to say.

I was visiting my original in-laws in November of 1979 when the ideas for two songs came to me. This is one of them. What you can’t tell from just looking at the words,  however, is the rhythm was so tricky–so challenging–that I never bothered to write the tune down until 1993.

It was just as much a challenge to play.

I’ll never forget doing a program at Allen Memorial Baptist Church in Salisbury, Maryland, one Sunday evening closer to 1979 than to now. I was sitting on a stool. “The First & Second Mile Blues” made me so nervous that the guitar bounced up and down on my knee from start to finish, and I’m not sure how many right notes I hit–if any. No wonder I decided never to do that song in public again!

But my friends at the Ashland Convalescent Center are pretty low key and uncritical, and I don’t get as uptight about mistakes as I used to. So a year or so ago I chanced doing it for them. It not only went well, they actually seemed to like it.

Enough about that, though.

If you’re familiar with Jesus’ teachings, the idea of voluntarily going the second mile in doing something distasteful for someone rather than just the required first mile–that teaching can be applied to so many aspects of life–then you understand where the idea came from.

You can see why I’ve chosen to share this song the  week after “An Empty Spoon.” Both songs warn people who try to pass their wisdom along to others–especially if it’s unsought–in a forceful and distasteful way to back off. No wonder we tend to describe people like that as “Bible thumpers” and accuse them of hitting listeners over the head with their Bibles.

They can’t seem to understand that nobody wants to listen to them until they’ve established themselves as genuine examples of what they’re proclaiming. As Christians, that often means going the second mile to establish a credible relationship.

If this song has spoken to you, please leave a comment. 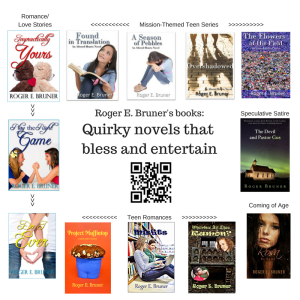 Seventy-four-year-old Roger E. Bruner is the author and publisher of eighteen Christian novels and the writer of more than two hundred Christian songs and choruses, a handful of musical dramas, and a number of shorter works. He sings, plays guitar and bass, and records his original songs in his home studio. He will be active in his church's nursing home ministry again when circumstances permit and in the church choir when it starts up again. In the meantime he'll keep playing bass on the praise team. Married for seventeen years to Kathleen, he has one grown daughter. Kathleen has two. Roger enjoys reading, moderate exercise, photography and book cover design (he's done all of his own except for Rosa No-Name), playing Snood, making walking sticks, and complaining about the state of the nation while continuing to pray for it.
View all posts by Roger E. Bruner →
This entry was posted in Bible Thumpers, Blues, Credibility, Second Mile and tagged Allen Memorial Baptist Church, As I Come Singing, Bible Thumpers, Blues, Credibility, Free Christian Lead Sheets, Free Christian Lyrics, On Aging Gracelessly, Roger E. Bruner. Bookmark the permalink.